Read about the Lyles, the history of Lylewood, and even a little about some of the first board of directors. Select from the list below to read an article. Thanks for your interest in Lylewood Christian Camp!

Lylewood wouldn’t even exist without the dream and dedication of a wonderful, Godly couple. Read more to discover just a little bit about this amazing family. 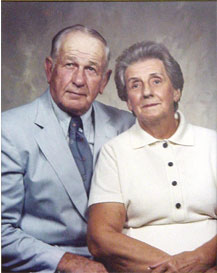 Lylewood began when Arch and Edwina Lyle had the idea to form a Christian Camp for training young people in the Central Tennessee and Western Kentucky Area. They made the first contribution toward this goal by deeding thirteen choice acres of land located high above the Cumberland River on Barkley Lake 22 miles downstream of Clarksville, Tennessee.

Young people were special to the Lyles and though they had no children of their own, they looked upon every Lylewood camper as their own. Because of their generosity and love for others as well as God, Lylewood Christian Camp has continued serving its purpose over the years.

Lylewood’s first and foremost function is the teaching of God’s Word. This is done under the guidance and supervision of Christians striving not only to teach, but to learn in the unique environment of Lylewood. It is a place to feel closer to God and each other.

Lylewood Christian Camp was first dedicated in a ceremony on May 21, 1966 and has been in use every year since that time. Lylewood is named in honor of brother Arch and sister Edwina Lyle who made the original donation of thirteen acres of land on which our current camp is constructed. The Lyles were lifelong faithful members of the Needmore Church of Christ. It was their dream to build a camp where young people could grow spiritually, make new friends and experience the beauty of God’s creation. The Lyles loved hearing the hills around camp echoing with children singing, this was a sound that brought them great joy. The Lyles have both passed on to their eternal reward but their example of generosity, caring and love live on with Lylewood Christian Camp, the camp volunteers and the young campers who attend camp.

Even though the Lyles made the initial donation of land there have been hundreds of people over the years who have donated time, energy and money to make the camp a success. The camp’s original construction had six very rustic cabins, three for girls and three for boys, a director’s cabin, and the main building which was a combination kitchen, dining area and meeting area. It also housed a shower and restroom facilities. Lylewood Christian Camp operated with these facilities for over twenty-five years.

In 1994, Lylewood volunteers began the construction of new and radically different cabins. These new cabins are two level cabins with air-conditioning, bathrooms and showers in each cabin. Going to the restroom at night no longer required shoes and a flashlight! In 1996, the director’s and cook’s cabin was rebuilt and expanded. These improvements also included showers and restroom facilities in each side. In 1997, four more new cabins were constructed which brought the cabin total for campers to four girl’s cabins and four boy’s cabins. As of this writing, only one of the original six cabins remains and is used for storage. In the spring of 1999 the focus turned to the dining hall and kitchen. The area was opened up with increased dining capacity and the kitchen reconfigured to make meal preparation and dish washing easier. By doing away with areas that were used very little in the main building, the dining area and kitchen were expanded. We also added much needed storage space in the main building.

Lylewood has had a major impact on this area of Tennessee and Kentucky, that is, it has had an impact on the lives of so many people. Hundreds of people have come to know Christ at Lylewood Christian Camp. Lifelong friendships have been formed and many married couples first formed their friendship at Lylewood as young campers. Several of today’s board members grew up attending and loving Lylewood. Though the physical face of the camp has changed in recent years and will continue to change in the years to come, the purpose and goals will always remain focused on God. Planting seeds and nurturing them helps the young and old alike to grow in a Christian environment.  Lylewood helps provide teaching, training, fun, friendship and most importantly, spiritual growth. Lylewood’s future is indeed bright. Thank you for being a part of Lylewood, we hope it becomes a part of you. When Lylewood was much newer, Jim Monday wrote the following article which appeared in The Leaf-Chronicle. Read more for the entire article. Also, if you click on the images a larger version will appear in a new window.

Take 15 beautiful country acres, add a lake, swimming pool, ball fields, then stir in a different group of youngsters every week or two and you come out with an interesting, but fun-filled summer, at least for the kids.
That’ s at least a partial description of Lylewood Christian Camp, a religious-oriented facility operated by members of the Churches of Christ and Barkley Lake just across from Cumberland City.
From Clarksville, the camp is located off U.S. Highway 79 west, on Lock C Road.
Its about 22 miles west of Clarksville near the Needmore Community, Lock C area, just inside the Stewart County line.
The last part of the drive to the camp brings you alongside Barkley Lake, or Cumberland River, and the road shoots straight for nearly a mile and all the while you’re driving toward the camp you see the old home place of Mr. and Mrs. Arch Lyle.
In fact, the land which makes up Lylewood Camp was donated by the Lyles some six years ago, and they still take an active part in the camps operation, and say they have lots of fun just seeing the visiting kids have a good time.
Having no children of their own, the Lyles go out of their way to see visitors have an enjoyable time.
Mrs. Lyle helps get the kitchen items, groceries, and helps in any way she can to aid the campers, while Mr. Lyle stays busy around the grounds, doing necessary maintenance and grass cutting and the like when necessary.

The Lyles, for many years members of the Needmore Church of Christ, talked with church officials some years back seeking a way they could be of help in church work, and after much discussion and soul-searching, it was agreed they would donate the land for Christian camp.  The property has beautiful trees, hilly landscape and is ideal for a camp, was named in honor of the donors.
A brochure on the camp reads, “The Lyles have made this donation because they wanted to do something that would benefit the Lord’s cause and last many, many years after their death.”
The land is a part of the large acreage owned by the Lyles and which has been in Mr. Lyle’s family for generations.
His great grandparents, his grandparents, and his parents, along with other members of the family are buried in the family cemetery just back of the large 12-room, 81 year old house in which the Lyles have resided all their married life.
Mr. Lyle came to the house when he was four years old to live with his grandparents.
The house was constructed by his grandfather, Maj. Tom Lewis, who fought in the Civil War.
Lylewood camp was dedicated in ceremonies on May 21,1966 and has been in use every summer since.

On the ground is a functional building which houses kitchen and dining facilities, washroom and restroom facilities and a large indoor recreation room.
On a second story there is a small canteen, and a door which goes out onto the grounds behind the building.
The roof of the concrete structure is also used for a play area, has basketball goals, shuffleboard area, and is used for stunt times and other recreation.
There are cabins for both girls and boys.
All these have been made possible through contributions of money, time and labor of individual Christians from different Church of Christ congregations.
The brochure relates that the camp provides “vacation facilities, Christian fellowship, leadership development, supervised recreation, Bible teaching, singing schools and workshops for teachers, elders, deacons, and preachers.” The purpose of the camp is to “establish, promote and perpetuate a Christian camp in north central Tennessee to provide for youth a wholesome environment and recreation under the guidance and supervision of Christians while instructing the youth in the knowledge of God’s Word.” Also in plans for the organization is to conduct at least one session a year for underprivileged children.
Although the camp is operated by the Church of Christ, the grounds are available to youth groups from other religious denominations.
The camp will open for summer operation June 20.
Persons interested in learning more about the camp or in making arrangements to participate in its activities may do so by writing the Lylewood Christian Camp, in care of the Church of Christ, 523 Madison Street, Clarksville, or by calling the Church of Christ office.
The current board of directors are Ernest Hardison, Arch Lyle, Felix Burkhart, Ben Flatt, Moody Barrentine, Lynn Allison, Bill Cannady, Joe Gray, John Richardson, Buford Darnell, David Gaylor, Doris Ryan, and Jim Morris.